Are you wondering if you should pursue Honor Society recognition after or even during high school?

And that’s exactly what our Honor Society does. We value our members and we celebrate them – as you’ll see in a moment.

Ready to meet them? We bet you already know most of them. Read on below.

First of all, Chadwick is older than he looks – he was born in 1977. You may know him from the 2017 hit film “Black Panther” which won a multitude of awards.

In the movie, he was T’Challa or the good black panther. He’s also played other famous black characters, like Jackie Robinson in ’42 and James Brown in “Get on Up”.

His career in film started in television, with shows like Third Watch and All My Children. But Chadwick isn’t just good at looking pretty and reciting lines. The man is smart. Really smart!

He was a part of the National Honor Society in high school, which he attended in South Carolina. He graduated with such honors from T.L. Hanna High School and is a notable alumnus.

We’re proud to say we have a super baseball star, a rock star, and a superhero among our NHS alumni ranks.

Tina Fey is close to our hearts. Not only is she absolutely hilarious, but she’s smart and not afraid to show it. You can read about her life (and tell her intellect) in her book, Bossypants.

She shows a great understanding of social intelligence when it comes to her daughter in the book. The daughter has a doll that can have black or blonde hair. The little girl calls the blonde side the “pretty side”.

To learn how Tina teachers her daughter to appreciate all sides of beauty, you’ll have to read the book.

But Tina’s accolades aren’t only being a great mother. She wrote and starred in a TV show, 30 Rock, which was a parody of sorts about Saturday Night Live.

She was on Saturday Night Live for years as well and has starred in several movies since.

This professional comedian and the very smart lady is one of our NHS alumni. She earned her membership in high school, where she graduated from Upper Darby High School.

The Pennsylvania-educated Fey keeps us laughing and we thank her for that.

What can Meryl Streep not do? She’s played every type of and every character under the sun – which takes a high level of intelligence.

We know she has that level because of her acting chops, but also because she’s an NHS alum. When she graduated from Bernards High School in New Jersey back in 1966, she did so with honors.

You can see Meryl’s intelligence shine through in the range of characters she plays. The woman has done everything from a fun post-prime rock star in Mamma Mia to be a very serious nun.

She does her homework when she does these films, as most NHS alum do because she never seems to miss a beat. Whether it’s a time-related detail or pronunciation on a specific part of the script, she nails it.

We wonder if any of her high school teachers knew what a star she’d end up being. Or which one she’d thank or remember fondly if you asked her.

Don’t get us wrong, we like Trevor Noah, but we do miss the Daily Show with Jon Stewart.

That was a show he hosted for years, though he retired in 2015. The show is a political commentary and news show, though it airs on Comedy Central.

It takes a very clever person (and a good team of writers) to come up with the kind of biting political commentary Jon is known for.

He understands how to deliver a joke about a sensitive topic that makes people laugh and makes them think.  It’s no wonder he’s able to perform that level of comedy, he studied psychology at and graduated from the College of William and Mary.

That was after he graduated from Lawrenceville High School, of course, where he was a National Honor roll student.

His hold on political theory and thought is so strong that the internet ranked him #7 on a list of “Celebrities that should run for president“. We don’t know his plans – but he wouldn’t be the first Chief of State to be an NHS alum.

Michelle Obama (though not Barack) was an NHS alumna herself.

It goes to show that you don’t have to be an NHS alum to achieve great things, but it certainly does help!

If all you know about Katie Couric is that she’s a television host – you don’t have the full story. Katie does host news and TV shows (occasionally) but she is a journalist in every way.

She’s risked her safety and her comfort to cover stories in far off and uncomfortable places. Places far from her Virginia Yorktown High School, where she was in the NHS.

Katie was one of the first women to do major news announcements and showed the networks that there was a place for women journalists in the breaking news space. She’s written multiple books, which have all ranked highly on national lists.

Katie is now working on personal projects, which we wish her much luck with. She has a podcast, where she does interview-based journalism on her own schedule and on topics she believes deserve coverage.

Not only is she a respected journalist, but she’s a philanthropist as well. She works to raise money for cancer research, in the memory of her late husband who died in 1998.

She brings us stories and helps other people live long enough to finish out their own.

Are you old enough to remember Mr. Rogers and did you ever watch his show, Mr. Rogers Neighborhood? Rogers went off the air in 2001 and died in 2003.

Many of us remember him as a calm, kind, and soothing voice that started off our mornings on PBS. But his show wasn’t just about entertainment.

The show was educational, but in a way that children didn’t realize they were learning.

Rogers had academic intelligence, of course, as he graduated from Latrobe High School with NHS honors. But he also had high emotional intelligence.

You can tell this by the way he walked children through solving problems with the use of his make-believe world (and puppets).

Rogers always made an effort to make his show inclusive, by bringing a new member of his “neighborhood” in each show and talking to them.

Though he’s no longer with us, you can see his influence reflected in the PBS series “Daniel Tiger”. Daniel often talks about his “neighborhood” and the show is set up to teach the same skills/ideas.

You know Carrie as a country music superstar, famous for songs like “Before He Cheats”. While it’s good songwriting and we love the visuals, we believe that Underwood is too smart to go around smashing cars and slashing tires.

That is since she’s an NHS grad from Checotah High School in Oklahoma.

She went to college, but she interrupted her studies to pursue her career on American Idol.

When she took her school break, she put most of her energy towards her music, which has brought her great success. She won American Idol season 5 and got a recording contract from there.

She didn’t ignore her studies along the way through. Even after winning American Idol and becoming a famous recording artist, Carrie made it to graduate school.

To date, Carrie has never put out an album that didn’t do well, and she doesn’t look like she’s stopping any time soon.

On the same musical note, Country/Pop singer Sheryl Crow also makes our famous alumni list. The award-winning singer/songwriter grew up in Missouri, where she graduated from Kennet High School with honors.

You may know that Crow has a successful musical career, but did you know she was a teacher first? She majored and got a degree in music education and taught it in St. Louis, to elementary schoolers.

That was until she moved to LA to pursue her musical dreams.

And she can consider those dreams pursued if there is such a thing. The American born artist has won more than one grammy for her work, both her solo work and on tracks with other artists.

To date, she’s won 10 Grammys and sold 50 million albums and songs in her lifetime. That’s the kind of success we like to see from our musical NHS alums!

There’s no lack of amazing women who graduated with NHS honors. Katie Couric, Sheryl Crow, and, of course, the iconic Diane Sawyer.

Diane is from Kentucky, where she attended Seneca High School.

After her high school graduation, Diane went to Wellesley College and got a bachelors of art. She tried her hand at a law school for a semester but found herself attracted to broadcasting.

And that’s what she’s most well known for. If Katie Couric is the face of current women-led journalism, Sawyer is the mother of it all.

She’s worked with celebrities, athletes, and even presidents. In the 70’s she was part of the team that worked with Nixon on his memoirs. Imagine helping a president write their book!

Since then, she’s only gotten bigger and more respected. She landed a huge interview with Caitlyn Jenner, back when she had just come out as Transgender.

She’s traveled for her journalism many times, to places as far away as Africa and the middle east.

She’s covered everything from the Olympics to the devastating 911 tragedy.

One of her most impressive feats, award-wise, was hers how on ABC titled “World News with Diane Sawyer”. While she was hosting, ABC saw it’s a most-watched season in six years.

When you think of supermodels, you probably don’t think “National Honor Society”, but in Cindy’s case, you’d be incorrect.

Cindy is proof that you can be one of the most beautiful women the world has ever seen, without compromising your intelligence.

Cindy, who’s from a small town in Illinois graduated with NHS honors from DeKalb High School.

Since then, she’s made a name for herself walking for almost every major designer in the world. Her daughter, who’s about 18, is now a model herself.

Kaia Jordan Gerber is following in her mother’s footsteps and will take the world by storm (we’re sure). But only after she finishes high school!

While all the people on this list were smart enough to graduate with National Honor Society recognition, the range of their talents shows the importance of multiple intelligences.

We’re proud to live in a world where these stars and influencers (in a non-Instagram way) have shaped the world and our culture.

We know that those that invest in the NHS themselves and earn our recognition will change the world as well.

If you want to learn more about famous alumni and the history of the NHS, check out our museum. It recognizes more Honor Society Alumni and it displays old certificates, pins, and historical documents from the past 100 or so years.

Learn how to visit or get involved here. 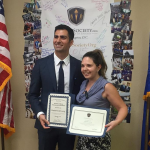 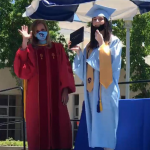 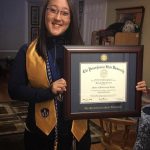 Job Search – 6 Ways to Stand Out from the Competition 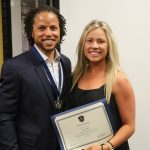 HonorSociety.org Research Tools: How to Search for Your Career Online. 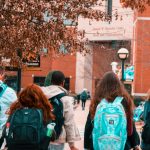 Connect with Honor Society Museum on social media channels for updates and news.